WellSpan Philhaven has its roots in the choice of young Mennonite men to choose an alternative way to serve their country during World War II – Civilian Public Service (CPS).

Many CPSers were assigned to work in State Mental Hospitals where they found thousands and tens of thousands of persons with mental illness in conditions that were less than human. One young man wrote to his family in Lancaster County saying “we treat the animals on our farm better than these people are treated.

And so as these 20 and 21 year old young men returned to Lancaster and Lebanon communities, they began calling, pleading for, the Mennonite Churches they were part of to “find a better way.”

Not only did the church hear the plea from their young people, but they acted. Coincidently, but with symbolic significance (Philhaven means “haven of love”), the Lancaster Mennonite Conference Bishop Board meet on Valentine’s Day 1944 to hear advocates for an alternative to the state hospitals. That day they appointed a Hospital Study Committee.

The vision of “There’s got to be a better way” gradually infiltrated many Lancaster Conference conversations. By February 1948, the Conference agreed to have the project proceed.

Many meetings by the Lancaster Mennonite Hospital Board (which later was named the Philhaven Board and used hereafter) ensued. Presentations in many congregations did not show strong support and four attempts to find land in Lancaster County were rebuffed with “not in my backyard.” A well-known doctor pronounced the work “too large for any church organization.”

Yet backed by the Bishop Board, the Philhaven Board pressed forward. These were the movers and shakers in the Lancaster Mennonite Conference at the time and they left few rocks unturned. But without land where they could build. Would they need to give up the dream?

In 1949 in a prayer meeting, Graybill Landis said to himself, “We don’t need this farm. God gave this miraculously. Maybe the Lord wants this farm for a purpose. Since we are childless, the state will claim much in taxes, used to destroy the bodies and souls of men. It is much better to give it to the Lord to save both bodies and souls.”

On a whim, ten years earlier at the height of the Depression, Landis stopped in at a sale in Lebanon County and without quite realizing what had happened, he ended up with the high bid of $11,700 and a 167-acre farm. That evening when he told Mary, she asked incredulously, “What is the matter with you?” Graybill later joked that perhaps Mary should take him to a doctor to have his head examined. 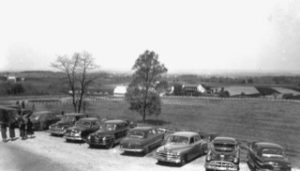 Several people asked the Landises whether they ever considered giving one of their farms to the church. Graybill and Mary had heard about the dream of young men returning from Civilian Public Service in the State Mental Hospitals to find a better way to treat persons with mental illness, their challenge to the church, and the difficulty that the Philhaven board was having in finding a location for a mental hospital.

So shortly after Graybill’s epiphany in that prayer meeting, he approached the chair of the Philhaven Board at the First Annual Meeting to offer the Lebanon farm to this project. The offer came after five years of work begun by the hospital study committee. 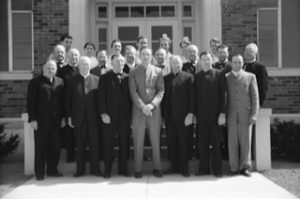 The response, to the Landis offer at the annual meeting of the board, was of great surprise and overwhelming gratitude. The board was nearly at the point of giving up on the vision. Had the Landises not made this gift, it is possible that Philhaven would not exist today.

By early 1950, Philhaven board members* (including dairymen Noah W. Kreider, J. Clarence Garber and Ira M. Eby) were canvassing Mennonite farmers asking them to consider donating one heifer to start the Philhaven Farm. According to Clarence’s son Jay, he along with other farmers, chose one of the best of their family’s herd. Giving of their best to God’s work was important.

From this strong pedigree of cows, Philhaven has been able to get a fair price for milk sold to Swiss Premium Dairy, a market that has been good for many farmers according to Luke Brubaker, Chairman of the PA Milk Board. This legacy has benefited Philhaven’s mission for 67 years.

Some 23 farmers** managed the Philhaven Farm over the years, stewarding this legacy of the farm and dairy herd. Financial surpluses from the farm have significantly contributed to Philhaven’s mission.

When Philhaven affiliated with non-profit WellSpan Health in January 2016, it was decided that WellSpan Philhaven would keep the farm. In an agreement with Lancaster Mennonite Conference, WellSpan added $2.26 million, the farm’s value, to the $5 million it promised to the Legacy Foundation established by Lancaster Mennonite Conference. The Conference-appointed Foundation board will use the annual earnings to support behavioral healthcare from a faithbased perspective.

Notes:
1) Prepared with information and some quotes borrowed from As Long as Grass Grows and Water Flows; The Story of Philhaven by Louise Stoltzfus (2002)