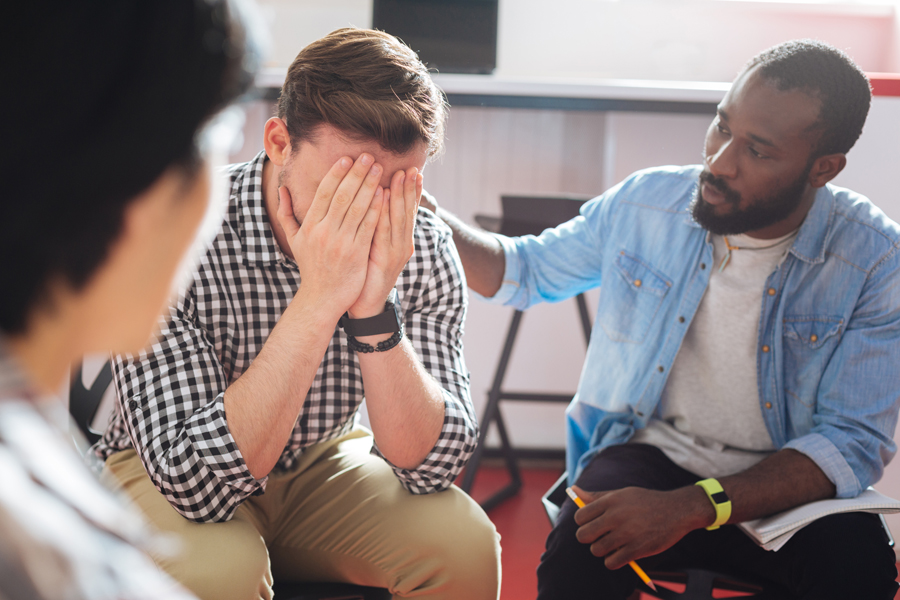 Churches Care: Championing Mental Health in the Body of Christ

The greatest strengths we possess are often the fruit of a seed that was planted in us long ago, during a vulnerable, painful season of our lives. For Janelle Bitikofer, that seed was God-sized: invisible to the natural eye, yet undeniably present and packed with promise.

As a mental health and addictions counselor, as well as an educator, Janelle has dedicated her career to serving people who are often greatly misunderstood and mislabeled in our society. Her own battle with depression as a young college student was the birthplace of what is now over 20 years of service in her community and around the globe, everywhere from psychiatric hospitals and inpatient drug treatment programs to outpatient counseling and emergency response services.

Her scope of influence does not end there, however. As a Christian and active church member, Janelle often interacts with fellow believers. Over the years, she noticed how many of them were drawn to her when they found out about her profession. They wanted to pull her aside, discreetly, to ask her questions and share their stories. Janelle could sense they were ashamed and felt compelled to hide their realities from the church at large, but they felt safe confiding in her.

While Janelle was glad to offer help on a case-by-case basis, she began to wonder at the silence and stigmatization of mental health and addictions in the church. Didn’t Jesus say that He came for the sick and the outcast?

God was stirring something inside of her. Like a sleeping seed about to awaken with life, God was preparing Janelle for new season of service and a unique mission field. God was calling Janelle to empower and equip the Body of Christ.

Linda Witmer, a colleague and a friend of Janelle, is a public health nurse and educator with nearly five decades of professional experience. She spent twenty-three of those years as a mission worker in public health and development. In both her professional practice and church, she had encountered countless individuals who were in need of mental health assistance but feared stigmatization. God had long been preparing the foundation of Linda’s heart for what He was about to do, so when Janelle shared her vision, Linda was ready!

Additionally, Linda and Janelle had the support of Eastern Mennonite University and We Rise International, a nonprofit organization co-founded in 2016 by Janelle and her friend Amy Vercler. Together, they had a clear, common purpose: “To empower Christian churches to understand the needs of individuals with mental illnesses and addictions in their churches and communities by providing them with helpful spiritual, emotional, and social support, and referrals to local mental health and addiction providers.”

They knew the why and the what of this huge dream. But what about the how?

A vision of this magnitude needs money to become a reality! Linda got to work on securing funding, seeking what ultimately became their “seed” money. Linda applied for a grant from the LMC Legacy Foundation, knowing that they accept grant proposals from non-profit organizations for innovative faith-based projects focused on improving mental health. The proposal was approved, and their initiative, now known as Churches Care, was awarded $69,000!

Not only did they have the financial support they needed from the LMC Legacy Foundation, but they experienced the heart behind why they exist. Just like Churches Care, LMC has a passion to see the hurting healed in Jesus’ Name. A beautiful partnership was formed.

Flash forward to late 2019. Churches Care had just launched with their very first training! 25 church leaders from various parts of Pennsylvania gathered for two days to gain the practical, powerful tools they needed to begin implementing changes in how they recognize and offer resources for mental health issues and addictions within their congregations. The impact was tangible! The resounding sentiment was that the training they received was so desperately needed and would be life-changing for their congregants.

A few weeks later, a new year had begun and was full of promise! Churches Care was gaining momentum, moving forward with the 18 months of support services that they offer to participants. Additionally, they had begun preparing for their next training session with a new batch of attendees, when the unthinkable happened—the world shut down.

Linda and Janelle, like so many of us who had just begun a new venture in 2020, were suddenly seeing doors slamming shut that had been wide open only moments earlier! Fortunately, LMC Legacy Foundation was not one of those doors. It extended their grant an additional year and worked patiently with them throughout the long, dormant season.

For Churches Care, the beauty from the ashes of the pandemic is that the entire world became simultaneously aware of the desperate need for mental health issues to be more publicly and appropriately addressed. As frustrating as it was to be abruptly disrupted from the work they had only just begun, God was not taken by surprise. To quote Esther, He had been preparing them “for such a time as this.”

Today, Janelle and Linda see how God also expanded their capabilities during the season of shutdown. They learned how technology and virtual communication can widen their scope of influence like never before. They are working on creating online training sessions and resources that can be utilized around the world.

Despite disappointment and setbacks, Churches Care is now more equipped than ever to fulfill their God-given vision. They are so grateful for the support they have received from LMC Legacy Foundation and know that it will have an exponential impact. As church leaders’ lives are changed, they will inevitably impact their congregants. The congregants will impact their families and communities. With the global reach afforded by technology, the little seed once sitting in Janelle’s heart will now bear fruit all over the world!

One life that has already been indelibly impacted by Churches Care is Mark Troyer, a lay leader of a megachurch near State College. He learned about the Churches Care ministry through an email he received from Eastern Mennonite University. He had taken courses there from 2013-2017 and was still receiving correspondence when Churches Care sent an invitation that immediately caught Mark’s attention. Having been diagnosed with bipolar disorder in the 1990s, after several years of struggling to understand what he was battling, Mark knew all too well how desperately the Body of Christ needed what Churches Care had to offer.

As a Christian and individual with a mental health diagnosis, Mark had experienced inconsistent reactions from church leadership. In some instances, he was met with wise counsel and support, and in other situations the help he needed was lacking or misguided. One Christian counselor advised him to wean himself off medication, which led to a six-year period of “calm” before a terrible storm. His recurrence of a manic episode and subsequent depressive crash solidified Mark’s currently held viewpoint that prayer and counseling alone are not always the solution. He believes firmly in God’s ability to supernaturally heal, but he doesn’t believe we can receive it “on command.”

In Mark’s journey, there were two distinct seasons when he felt as though the months-long depression he was facing would never end. Both times, however, he received a combined treatment of prayer, counseling, and medication that brought him to the other side.  “I feel like I’m a success,” Mark says. “It’s not perfect. I’m not healed, but I’m living life…following Jesus in everyday life, and I feel really grateful for that.”

He is also extremely grateful for the blessing of a family he once thought he would never have. Today, he is a husband and a father of a six-year-old daughter. With a grateful heart and ardent desire to help others with mental illness find the support they need, Mark says, “I’m looking for something that integrates a faith perspective into the reality that there are biochemical issues with mental illness that need to be taken seriously.”

Fortunately for Mark, and many others who share his sentiments, Churches Care is that “something.”

When Mark attended the training weekend held in 2019 in Lancaster, he knew he was in the right place. He was pleasantly surprised at how reasonably priced it was and would come to learn that the LMC Legacy Foundation’s grant made this possible. Mark’s cohort was only about ten people, which allowed for everyone in the group to interact and connect deeply. Another pleasant surprise!

Mark says, “It just was really affirming to able to share within that setting, to be able to make connections, and see folks come to some ‘a-ha’ moments about mental illness.”

The first session focused on mental health issues, and much of the information was enlightening to Mark, who was unfamiliar with certain diagnoses distinct from his own. The second session centered on addictions, and Mark sensed that his awareness and compassion grew considerably for individuals battling them, particularly loved ones who came to mind.

“I came back from these sessions really charged up!” Mark exclaims as he explains the next steps took to share what he learned from his training. Contacting his pastor was his first move. Churches Care provides a survey for churches to complete that helps them assess their areas of strengths and weaknesses in terms of meeting the mental health needs in their congregation. Then, Churches Care offers to brainstorm ways to improve, innovate, or expand what they already have in place.

Mark’s next step was to begin sketching out an idea for a congregant-led ministry approach that supports individuals with mental health issues, modeled after the type of support that foster parents receive when they take in children. This “village” approach is in the works and may take time to refine, but Mark is driven by a vision of hope and healing in Pennsylvania’s future.

“Radical hospitality really transformed my life,” Mark says. He believes that real change can take place if people struggling with their mental health know they can go to church to get help because they will have the hope of abundant life despite their mental illness. He would, of course, love to see people come to Jesus while seeking help, but it is important to Mark that the needs of the individuals are met, regardless of where that person is presently on his or her faith journey.

Mark’s experience with Churches Care and enthusiasm for the work they’ve begun led him to speak at their training in Philadelphia, where his message made a powerful impact on all in attendance. For Janelle, Linda, and all the leadership of Churches Care, Mark exemplifies the exponential impact believed possible when they had the vision for the ministry. One transformed life can transform countless others!

What can God do with the combined forces of His prompting, your passion to see mental health improved, and a grant from LMC Legacy Foundation? Perhaps, it’s time you find out!